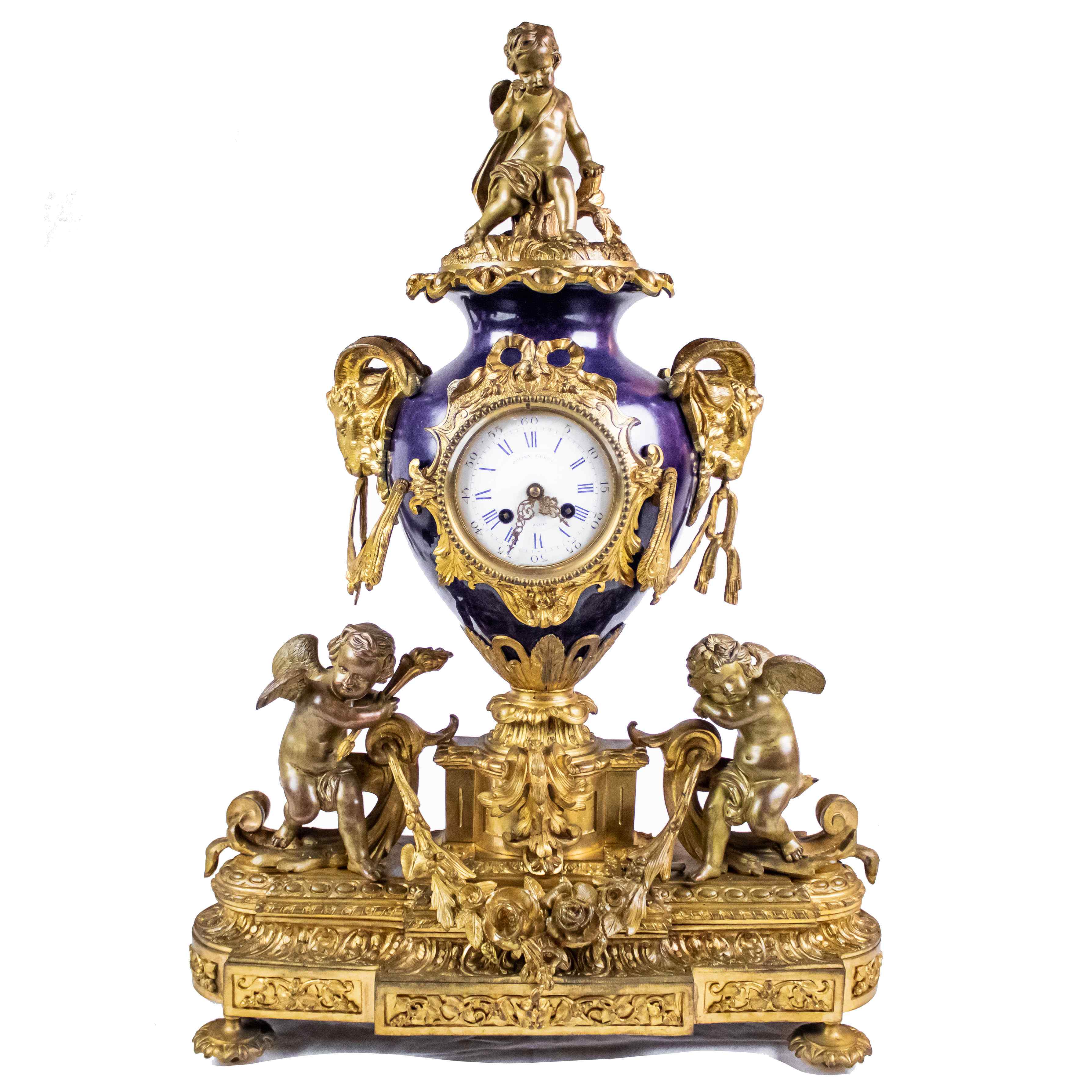 The exquisite workmanship of this clock, in gilded bronze and porcelain, is embellished with erudite symbolic-allegorical meanings which are referred to in the rhythmic presentation of various figures that stack the surface. Three putti mark the height limits, one at the top and two at the external lateral corners, which hold lighted torches or sleep peacefully. The underlying meaning in this case refers to the very nature of the clock, defining the passage of time, like the two cherubs, in which the allegory of waking, in the lively angel, and of sleep alternate figuratively. The main body in which the watch case is enucleated is elaborated in the form of an ancient Greek amphora, in a metaphorical side by side with the beauty of classical vases. Where an amphora would have housed the handles, in the present two solid heads of rams are fixed, characterized by recognizable stops and slightly convex profiles; in heraldry the ram has long been a symbol of strength and resoluteness, and in the present its re-proposition is justified, in addition to the admirable purely aesthetic effect obtained by the nobility of the animal, here preciousness added by already excellent workmanship. The festoons held up by rams and sprung above the cherubs are symbolically linked to those already in the ancient Roman friezes interspersed with bucranos, a reflection once again on the passage of time. A similar argument is encouraged for the various floral wreaths and the blossoming roses, poured into a soft branch between the two little angels at the base, ripe buds of eternal youth. The watch bears the name of Julien Le Roy (1686-1759), a famous Parisian watchmaker, on the dial. Le Roy, belonging to an already established family of well-known watchmakers, obtained the qualification of maître horloger in 1713, only to be appointed in 1739 by the appointment of the King's Watchmaker thanks to Louis XV. The family business, with Julien now in the fifth generation, was pursued by children and grandchildren, in turn famous for their many passions, and also operating in the world of publishing, physics and archeology. Some Leroy watches, with the brand bearing Julien's name, are now on display at the Victoria and Albert Museum in London, emblematic of the great fascination exercised in the eighteenth century by the arts applied to mechanical components. Also worth mentioning are the specimens preserved in the National Museum of Lisbon, similar to the present for the same Baroque treatment of gold, as well as the watches now part of the most renowned English noble collections, such as the one at Waddesdon Manor in Buckinghamshire, England, the baron's château Ferdinand de Rotschild (1839-1898). The heartfelt fame of Le Roy required the design and production line also for watches to be used in the maritime reality, such as the silver specimen with a scale for latitude, in the collections of the National Maritime Museum in London, part of the bequest of Geoges Bernard. The two specimens today in the Paul Getty Museum in Los Angeles, one of which unlike the present one is wall mounted, are characterized by the same lively angels climbing between baroque spirals and scrolls and by the same plastic flair.

Other items that may interest you from: Ars Antiqua srl - ARS ANTIQUA

All items in the category: Mantel clocks