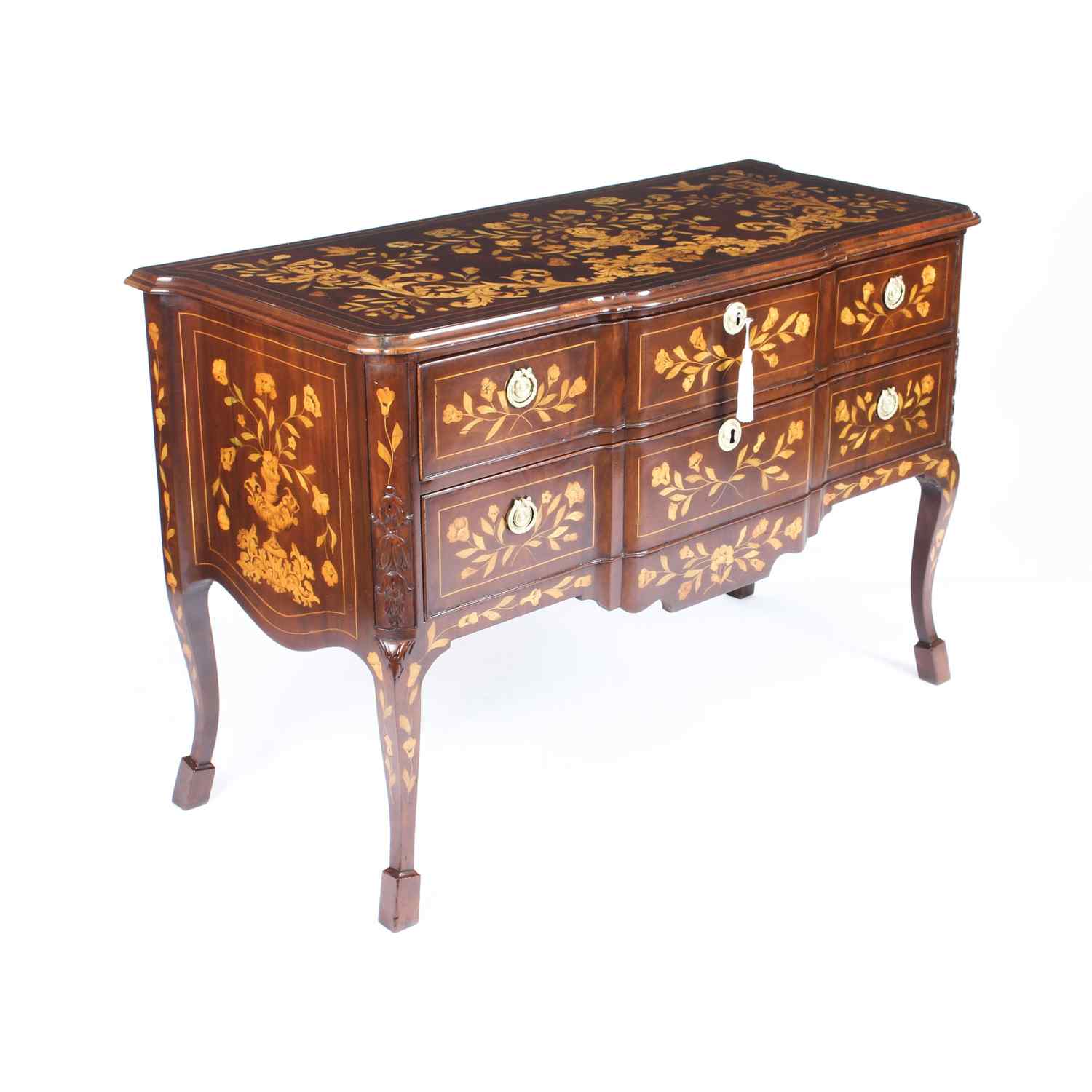 This is a stunning antique early 19th Century Dutch floral marquetry block front chest of drawers, circa 1820 in date.

This splendid chest has been accomplished in striking figured mahogany and expertly bordered with sycamore lines. The top with a moulded edge and re-entrant corners has been decorated with a plethora of exquisite hand cut marquetry of bird, flowers and foliage, centred by a beautiful urn of flowering stems, the sides similarly decorated with urns of floral foliage.

It has two capacious full-width drawers - with splendid pierced brass cast ring handles and escutcheons, is complete with the original working locks and keys and is raised on elegant cabriole legs that terminate in block feet.

This exceptional piece represents a fantastic example of Dutch marquetry cabinetry at its very finest.

Condition:
In excellent condition having been beautifully cleaned, French polished and waxed in our workshops, please see photos for confirmation.

Marquetry
is decorative artistry where pieces of material (such as wood, mother of pearl, pewter, brass silver or shell) of different colours are inserted into surface wood veneer to form intricate patterns such as scrolls or flowers.

The technique of veneered marquetry had its inspiration in 16th century Florence. Marquetry elaborated upon Florentine techniques of inlaying solid marble slabs with designs formed of fitted marbles, jaspers and semi-precious stones. This work, called opere di commessi, has medieval parallels in Central Italian "Cosmati"-work of inlaid marble floors, altars and columns. The technique is known in English as pietra dura, for the "hardstones" used: onyx, jasper, cornelian, lapis lazuli and colored marbles. In Florence, the Chapel of the Medici at San Lorenzo is completely covered in a colored marble facing using this demanding jig-sawn technique.

Techniques of wood marquetry were developed in Antwerp and other Flemish centers of luxury cabinet-making during the early 16th century. The craft was imported full-blown to France after the mid-seventeenth century, to create furniture of unprecedented luxury being made at the royal manufactory of the Gobelins, charged with providing furnishings to decorate Versailles and the other royal residences of Louis XIV. Early masters of French marquetry were the Fleming Pierre Golle and his son-in-law, André-Charles Boulle, who founded a dynasty of royal and Parisian cabinet-makers (ébénistes) and gave his name to a technique of marquetry employing shell and brass with pewter in arabesque or intricately foliate designs.

Mahogany
is probably one of the largest ‘families’ of hardwood, having many different varieties within its own species.

Mahogany has been used for centuries in ship building, house building, furniture making etc and is the core structure of just about every 19th century vanity box, dressing case or jewellery box. It became more of a Victorian trend to dress Mahogany with these decorative veneers, such as Rosewood, Kingwood, Burr Walnut and Coromandel, so that the actual Mahogany was almost hidden from view.

Mahogany itself is a rich reddish brown wood that can range from being plain in appearance to something that is so vibrant, figured and almost three dimensional in effect.

Although Mahogany was most often used in its solid form, it also provided some beautifully figured varieties of veneer like ‘Flame’ Mahogany and ‘Fiddleback’ Mahogany (named after its preferred use in the manufacture of fine musical instruments).

Cuban Mahogany was so sought after, that by the late 1850?s, this particular variety became all but extinct.

All items in the category: Antique Chest of Drawers