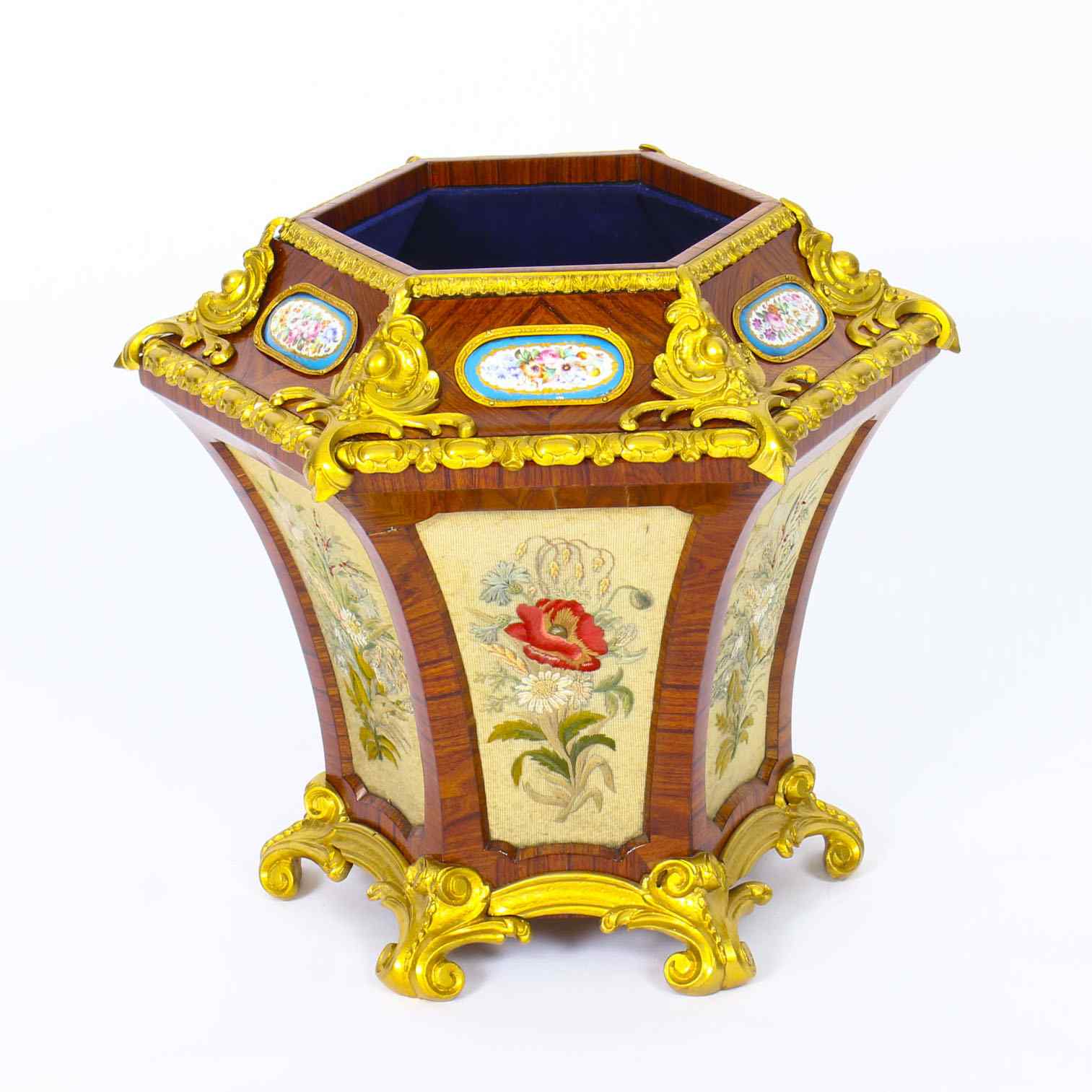 This is a magnificent and exceptionally rare antique French ormolu mounted burr walnut and kingwood jardiniere, also ideal for use as a luxurious waste paper basket, circa 1870 in date.

The jardiniere is of hexagonal shape with inward curving sides, is exquisitely decorated with rich gilded ormolu mounts and stands on six elegant scrolling ormolu legs.

The top shoulders of the jardiniere have six oval hand painted Sevres porcelain plaques which depict a variety of flowers and leaves - including pink roses, violettes and daisies.

Each side of the hexagonal body has a superb petit point needlework panel depicting flowers and leaves. The craftmanship of such needlework is extremely finely detailed and even the nuances of the foliage show in all their glory.

Not only is this delightful piece of exeptional quality and rare beauty but its provenance makes it also a unique piece. In fact, it belonged to the Grand Duchess Olga Nikolaevna of Russia (1822-1892), later Queen Olga of Wurttemberg, who received it as a gift from her father Tsar Nicolas I (1796-1855) on occasion of her marriage to Crown Prince Karl Friedrich Alexander of Wurttemberg (1823-1891) in 1846.

Condition:
In excellent condition having been beautifully cleaned polished and the interior relined in our workshops, please see photos for confirmation.

Walnut & Burr Walnut
Walnut is a hard, dense, tight- grained wood that polishes to a very smooth finish. It is a popular and attractive wood whose colour ranges from near white in the sapwood to a dark hew in the heartwood. When dried in a kiln, walnut wood tends to develop a dull brown colour, but when air-dried can become a rich purplish-brown. Because of its colour, hardness and grain, it is a prized furniture and carving wood. Walnut veneer was highly priced and the cost would reflect the ‘fanciness’ of the veneer – the more decorative, then the more expensive and desirable.

Burr walnut refers to the swirling figure present in nearly all walnut when cut and polished, and especially in the wood taken from the base of the tree where it joins the roots. However the true burr is a rare growth on the tree where hundreds of tiny branches have started to grow. Burr walnut produces some of the most complex and beautiful figuring you can find.

Walnut "burrs" were often used to make fabulous furniture. Veneer sliced from walnut burl is one of the most valuable and highly prized by cabinet makers and prestige car manufacturers and is also a favourite material for shotgun stocks.

Inlay was commonly used in the production of decorative burr walnut furniture, where pieces of coloured veneers are inlaid into the surface of the walnut, adding delicate or intricate patterns and designs. Inlays normally use various exotic veneers, but other materials such as mother-of-pearl, brass or bone were also be used.

Ormolu - (from French 'or moulu', signifying ground or pounded gold) is an 18th-century English term for applying finely ground, high-carat gold in a mercury amalgam to an object of bronze. The mercury is driven off in a kiln leaving behind a gold-coloured veneer known as 'gilt bronze'.

Sevres Porcelain
traces its roots in France to early craftsmen who had small manufacturing operations in such places as Lille, Rouen. St. Cloud, and most notably Chantilly. It is from Chantilly that a cadre of workers migrated to the Chateau de Vincennes near Paris to form a larger porcelain manufactory in 1738.

All items in the category: Other Antique Furniture