Morteza Pourhosseini "The Circus 15" Oil and Acrylic on Canv 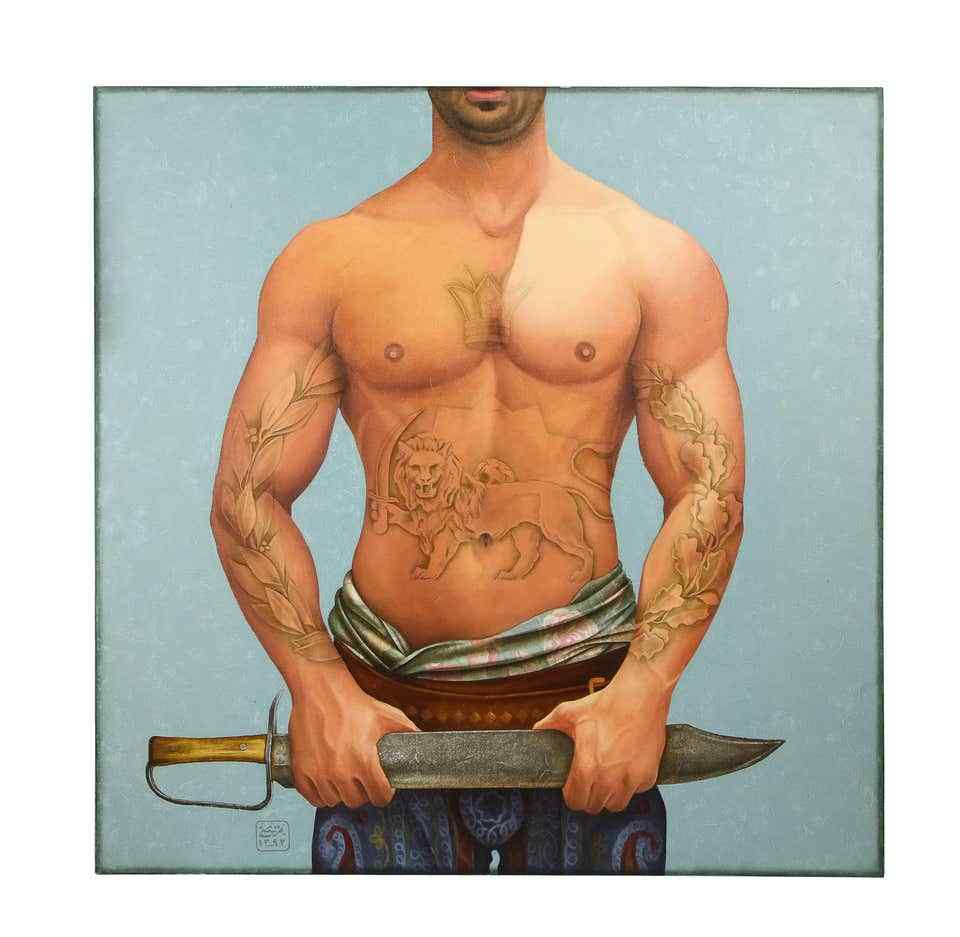 Morteza Pourhosseini (Iran, born 1985) "The Circus 15" oil and acrylic on canvas, 2013 . Depicting a muscular male nude with "The Persian Iranian Lion" tattooed on his stomach and a Safavid dagger in his hand, standing strong and proud. An exceptional Iranian Contemporary Artwork. Born in Ahwaz, Iran in 1985, Morteza Pourhosseini has been the recipient of numerous accolades and awards, and his paintings have sold at Sotheby’s London and Bonhams London auction houses as well as to The Metropolitan Museum of Art in New York. Highly gifted and a consummate draughtsman, Morteza Pourhosseini's works exhibit a sense of realism and technical dexterity seldom encountered in contemporary art. His works borrow themes from Iran's popular religious imagery which serve as backdrops to portraits of everyday figures. Pourhosseini's work often involves the interplay between people and works of art, this portrayal of "art within artwork" not only demonstrates his extraordinary talent in capturing tonal and aesthetic layering but allows him to create a dialogue between cultural imagery and the people associated with it. In his series, The Circus, Morteza Pourhosseini is taking us to a place where the promise of beauty is easily co-mingled with the terror of power. He presents his dichotomy with portraits of the abusers and also, the victims. With brilliant brushstrokes and a balanced point of view, Morteza Pourhosseini creates characters on canvas who have not only experienced the rapture of religion, but have also had their lives ripped apart by it. Morteza Pourhosseini: Born in Ahvaz - Iran 1985 BA in painting course from Shahed Art University His works sold at Sotherby’s London & Bonhams London auction house (middle eastern contemporary art) Exhibited in Abu Dhabi Art Fair 2009 Exhibited in (Million Cornette de Saint Cyr) Paris contemporary art 2009 Solo Exhibition Photo Montage 2009 Tehran Participated in 20 group shows 2007-2013 Awarded First prize in the Damoonfar Visual Art Festival 2008 Selected as Outstanding New Artist at the Youth Visual Arts Festival Since 2010 he has been represented solely by Massoud Nader (Nader & Nader LLC) and his works have been sold to major collectors. Three pieces of his “Soldiers” series has been purchased by The Metropolitan Museum of Art New York, summer of 2013 November 2013 in New York was his first International solo show His third solo show titled “The Circus” was held at Bohemian National Hall in New York in the same year and he has participated in various group exhibitions in Iran and abroad. To see art, I closed my eyes as I heard the circus bells of a Morteza Pourhosseini’s painting The show is about to begin Modern and classic intersected by motives of Middle-Eastern culture Portraits of modern figures inspired by elements of their tradition Uni-color background set against multi-colored views I can smell the density of the atmosphere now Metal, leather, brass and silk I open my eyes What is real, and what is not? The audience awaits the bells to ring Life is a circus Are you ready to open your eyes and see? - Pourya Saffarian Dimensions: 60 x 60” (150 x 150 cm).


All items in the category: Antique Portraits