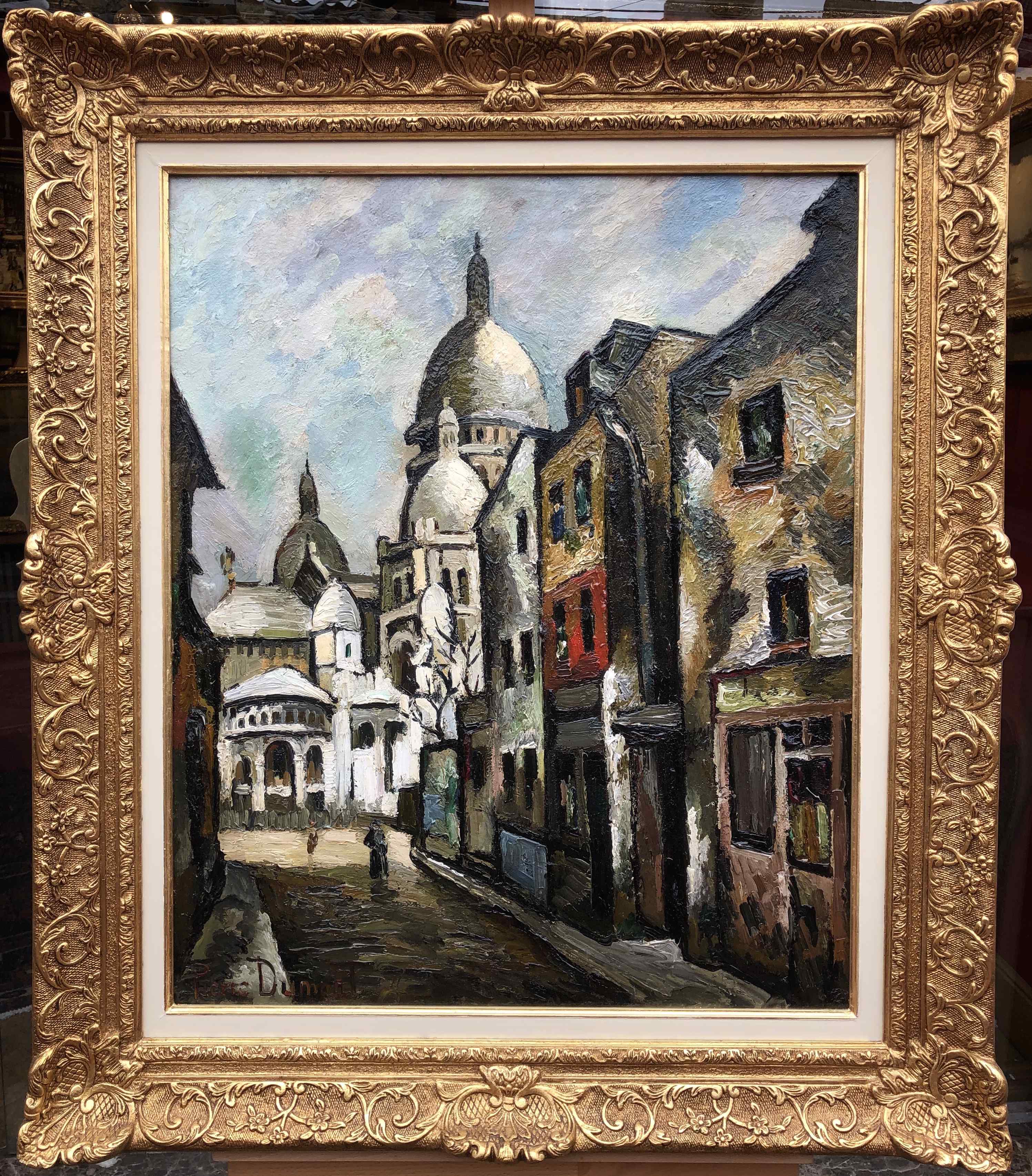 DUMONT Pierre (1884/1936) Paris Montmartre, the Sacré Coeur seen from the rue du Chevalier de la Barre. Oil on canvas signed lower left. 73 x 60 cm Certificate of authenticity. DUMONT Pierre Born March 29, 1884 in Paris / Died April 9, 1936 in Paris. Painter of landscapes, urban landscapes, seascapes, still lifes, flowers. Expressionist. Pierre DUMONT is one of the most original and most unknown painters of the Rouen school. Having come to Paris at a very young age, Pierre DUMONT lived there poorly in the La Ruche district, then returned to Rouen around 1905, he painted very colorful landscapes, in an oily and thick paste spread out on the canvas as if he was sculpting his vision. To contain his "Fauve" temperament, Pierre DUMONT entered the Rouennaise Academy of Joseph Delattre, then founded with friends artists and writers the group of XXX which became in 1909 the Norman Society of modern painting. His first paintings were marked by the influences of Van Gogh and Cézanne. From around 1910 Pierre DUMONT began to paint Rouen cathedral, from 1914 to 1919 he mainly painted the streets of Montmartre, Notre Dame cathedral, the bridges of Paris and the banks of the Seine. From 1911 to 1916, Pierre DUMONT lived at the Bateau-Lavoir where he became friends with Picasso who kept a workshop there. Pierre Dumont made his first solo exhibition at the Galerie Malpel in 1914, where the vigor and intensity of his landscapes, particularly in Paris, struck critics and the public. In 1927 Pierre DUMONT suffered his first mental crisis, but once recovered, his exhibition at Durand-Ruel was a great success. From 1929 the health of Pierre DUMONT declined and hemiplegia deprived him of his right hand; he now paints clumsy canvases with his left hand which will harm his work which, in its best period remains to be discovered Museums: National Museum of Modern Art, Paris, Montmartre Museum, Paris, Museum of Fine Arts of Rouen, Museum of modern art of Troyes., Museum of Fine Arts of Dijon, Museum of Fine Arts of Menton, Collection "Peindre en Normndie", Regional Council of Lower Normandy, Caen, Prefecture of Cantal, Aurillac, Consulate General of France , Rio de Janeiro, Petit Palais Museum, Geneva, Milwaukee Art Museum (Wisconsin).