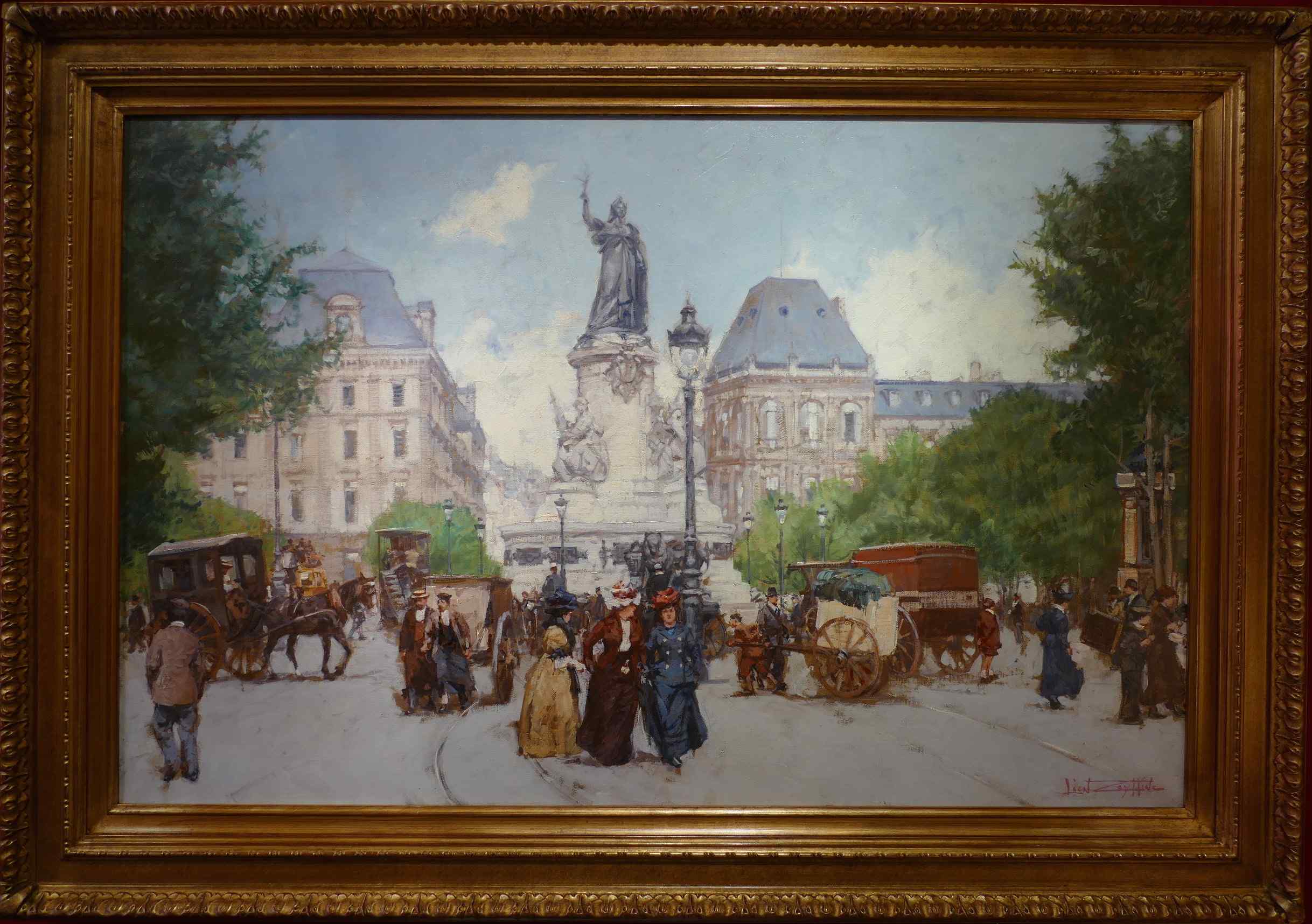 Leon ZEYTLINE (1885/1962) Place de La République, Boulevard du Temple. Oil on canvas signed lower right. 65 x 100 cm Leon ZEYTLINE Of Russian origin and in love with Paris, the post-impressionist painter Léon Zeytline brilliantly captured the exhilarating spirit of Paris. He made the City of Light the main subject of his work for many years. The Paris of yesteryear opens in all its splendor and in every detail, joyful and modern, dynamic and charming, in the paintings of an artist today unknown to the general public, most of his works are kept in private homes. Only the Carnavalet, Hamburg and Mulhouse museums have a few paintings by Léon Zeytline. Léon Zeytline was born in France, where his family of Russian origin settled long before the revolution. At 15, the young man began his studies at the Moscow School of Painting, Sculpture and Architecture, family circumstances having forced his relatives to return to Russia. Even during his student years, he traveled extensively in Europe. During one of these trips in 1909 (after graduating in 1908), he returned to France, where he decided to settle permanently. Dazzled by the beauty of the French capital, the young painter made Paris the central subject of his work for many years. He devotes more than 500 paintings to it, a veritable encyclopedia which tells with a precision characteristic of the Russian school, and a luminosity borrowed from the French Impressionists, the city in all its forms. Unlike some of his post-Impressionist contemporaries, Léon Zeytline did not take orders and only represented the Parisian subjects who captivated him, without commercial pretension. He painted daily Parisian life as well as the fashionable places of the capital.His works include the famous Haussmann boulevards, very fashionable, such as the Champs-Elysées or the Avenue de l'Opéra, with their prestigious cafes. , emblematic monuments such as the Eiffel Tower, but also working-class neighborhoods with their markets and shops. All the scenes are animated by characters out for a walk or busy with their daily chores. The sophisticated frills and hats of the fashionable ladies and the dresses of the workers are portrayed with equal care. By their diversity and their authenticity, the Parisian scenes constitute true historical documents, witnesses of this time. The architectural description is particularly precise in the paintings of the artist. On his work representing the Moulin Rouge, we can discover the appearance of this famous cabaret as it appeared before the fire of February 27, 1915, which largely destroyed the Art Nouveau facade of the building. time to describe all the decorative architectural elements, the entrance to the halls and the ticket office, the posters of the music hall shows. The period photographs of the Moulin Rouge confirm Zeytline's precision in the representation of the details that will characterize this place until 1915. We also observe many means of transport in these paintings: imperial, American omnibus, Schneider bus, tramway, horse-drawn carriage. , train, cart and cart, not forgetting bicycles. Little by little, horses gave way to the Parisian avenues to cars. The metro entrances signed Hector Guimard are also part of the scenes of the life of Parisians immortalized by the painter. Zeytline loves festive Paris, under its air of elegance a bit of rabble. In the scenes representing the Parisian nights and the café-concerts as well as in the genre scenes, women always occupy a prominent place in Zeytline's work.They charm the gentlemen, deploy their seduction unceremoniously for their partners, are having fun and sadness, watching the champagne bubbles sparkle in the light of a candlestick. They remind us of the characters of Toulouse-Lautrec, Degas, Manet or Renoir, but the dresses, make-up and hairstyles allude to the 1920s. Léon Zeytline managed to make a living from his paintings, which were appreciated for their artistic qualities, but also for having understood so well the exhilarating spirit of Paris.