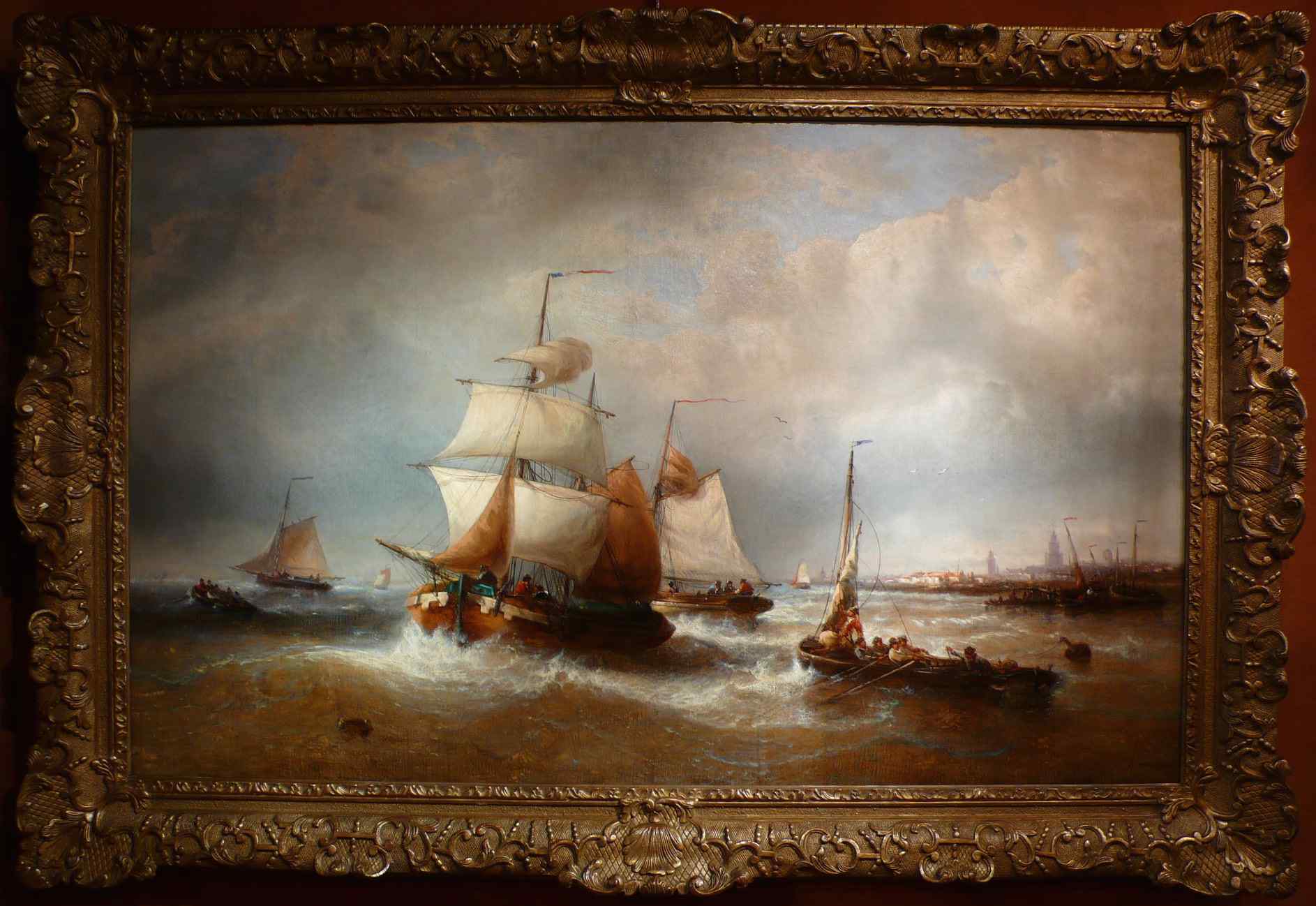 MUSIN François (1820/1888) Ships leaving the port. Oil on canvas signed lower right. 73 x 118 cm Certificate of authenticity. François MUSIN François-Etienne Musin (October 4, 1820, Ostend / October 24, 1888, Saint-Josse-ten-Noode) is a Belgian painter specializing in seascapes. Her father was an innkeeper, shipbuilder and oyster farmer who had spent some time in a penal regiment for desertion during the Napoleonic Wars. As a child, he paid more attention to the sea than to his studies. His artistic talent was discovered when he was locked in the attic as punishment and used a piece of charcoal to draw a view of the docks of Ostend on the wall. In 1831 he received his first lessons from Michel Van Cuyck and François-Antoine Bossuet, who would later become famous for his Vedutes, but still working for the port of Ostend at that time. Later he attended the Academy of Fine Arts in the city and was awarded a gold medal in 1835. By this time he had already gained some experience with sailing ships while looking after beds. of oysters from his father. He continued his studies at the Royal Academy of Fine Arts in Brussels, where he studied with François-Joseph Navez. At the same time, he made drawings of surgical interventions in the operating room of Doctor Louis-Joseph Seutin, with the intention of publishing them in a manual. In 1839 he was enlisted in the army, but his father paid for a replacement (a common practice at the time). In 1840, he began to exhibit and moved to Brussels in 1842. His career being well advanced, King Leopold I bought two of his paintings in 1845. Due to the interest in his art which existed in England, he spent some time. time there, he also travels to Spain and Portugal. He returned home in 1848 when his father fell ill. In 1849, he married the painter Marie-Célestine Gosselin (1826-1853). After his wife's untimely death, he gave his share of the family business to his brother Augustus, in return, for the studio and exhibition space in the family restaurant. He had also acquired public land where he built the "Pavillon des Dunes", the first structure on the beach, which he rented out and also sometimes used as a studio. In 1863, Leopold I built his royal pavilions nearby, which inspired a real estate boom and in 1865 Musin converted the Pavilion into a hotel. It was sold in 1877, demolished in 1879 and replaced by the "Splendid Hotel" which was destroyed during World War II. traveled extensively, visiting Portugal, the Alps, France, North America and Norway, where he participated in a whaling expedition. All these trips produced many sketches which were drawn up in his studio. In 1869, he eventually settled in Saint-Josse-ten-Noode where he built a huge garden studio, collected maritime antiques and gave his son Augustus his first art lessons. Since Kaiser Wilhelm I commissioned him eight navies in 1853, royal clients were an important source of its income. In 1865 two paintings were purchased by the Württemberg royal family and in 1873 two were acquired by al-Din Naser Shah Qajar. In 1869, the Museo del Prado bought his painting "The Shot Cannon - Signal for the Revolt of the Cadíz", and he was awarded the Order of Charles III. Oddly enough, the Belgian government did not buy his works until 1880. He died of a stroke. His friends and family have portrayed him as an enjoyable man who was always in a good mood and ready to share his many adventures. Collections: Municipal Museum of Fine Arts of Ixelles, (Brussels) Kunstmuseum aan zee, Ostend Royal Museums of Fine Arts of Belgium, Brussels Town Hall, Blankenberge Smidt Van Gelder Museum (nl), Antwerp Prado Museum, Madrid Museum National de la Marine, Greenwich Museum of Fine Arts, Montreal Sanssouci Palace, Potsdam Reims Museum of Fine Arts Château Uppark House.