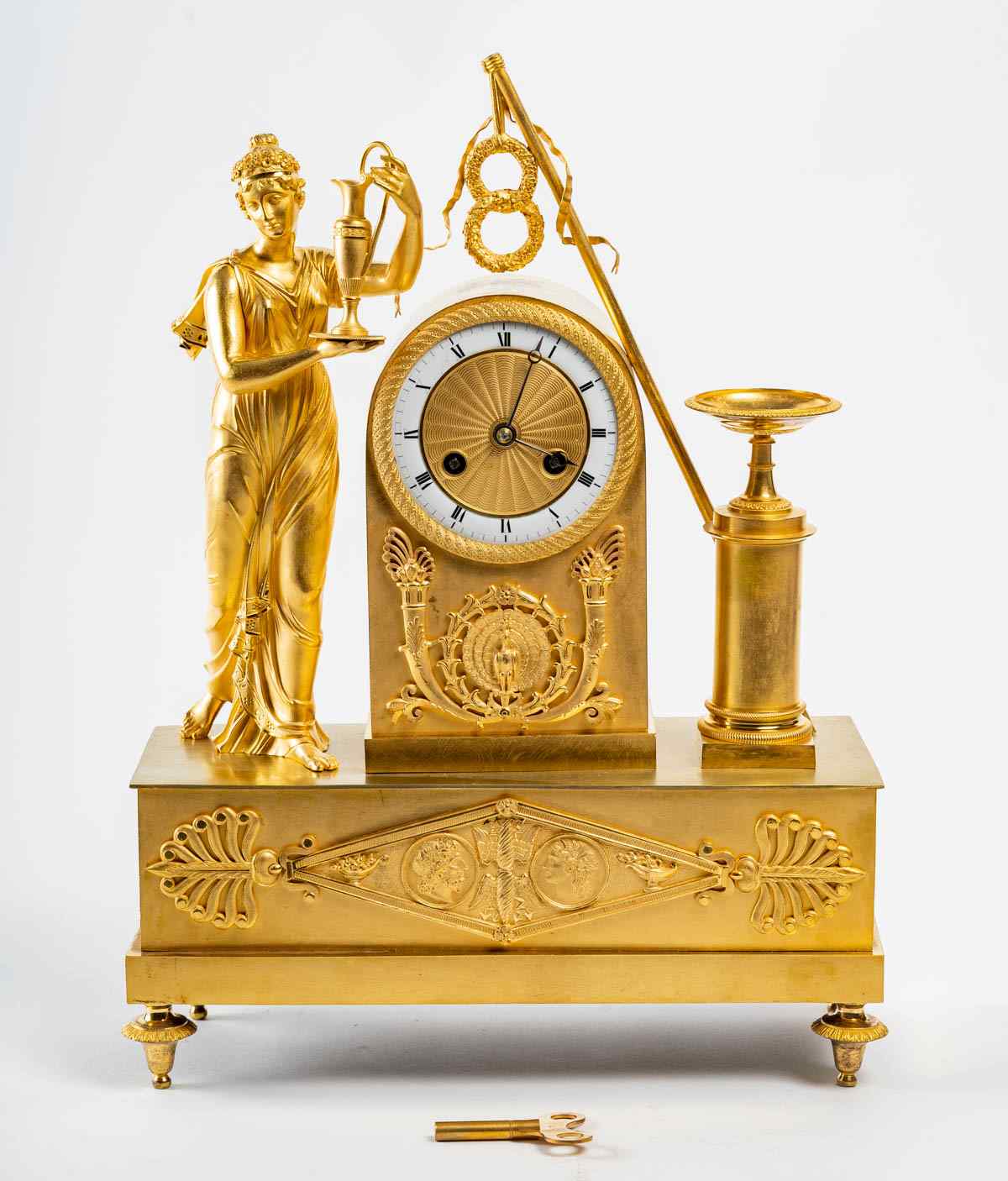 Sublime gilt bronze clock, the gilding with mercury is original. The dial is white enamelled and the hours are written in Roman numerals.

This model represents the myth of the Goddess Hera, skilfully portrayed.
Hera is the patron goddess par excellence of women and the goddess of legitimate marriage, guardian of the fertility of the couple and of women in childbirth.

Here we are in the presence of a sceptre with two wedding rings, female and male, embracing each other, symbolising the legitimate union of marriage. No veil for our beautiful goddess but an amphora filled with water, a reference once again to the history of our goddess where each year the hierogamy was celebrated, the sacred marriage of Hera and Zeus, which marked the renewal of vegetation. Hera found her virginity in the living waters of the springs and rivers.

Beneath the dial is a magnificent peacock doing a cartwheel, the favourite animal of our Greek deity Hera, wife of Zeus.

According to Greek mythology, the "eyes" visible on the peacock's tail were placed there by Hera to commemorate her faithful guardian, Argos, who had a hundred eyes (Ovid I, 625).

According to the legend, Argos was hired by Hera, who was jealous of Io, one of the nymphs courted by her husband Zeus, whom she suspected of adultery. She transformed the young woman into a heifer and entrusted her care to the giant to spy on her husband.

Argos had a hundred eyes and kept fifty of them open and constantly watching while the other fifty slept, so that it was impossible to deceive his vigilance. When Zeus realised this, he sent Hermes to kill him, and to rescue Io.

Hera decided to honour the faithfulness of the giant Argos by putting her hundred eyes in the tail of her favourite bird, the peacock.

The two young spouses are depicted in profile facing each other on the pillar, which rests on four finely chiselled feet.

This subtle "wink" reminds the couple of their vows of fidelity.
macos/deepLFree.translatedWithDeepL.text