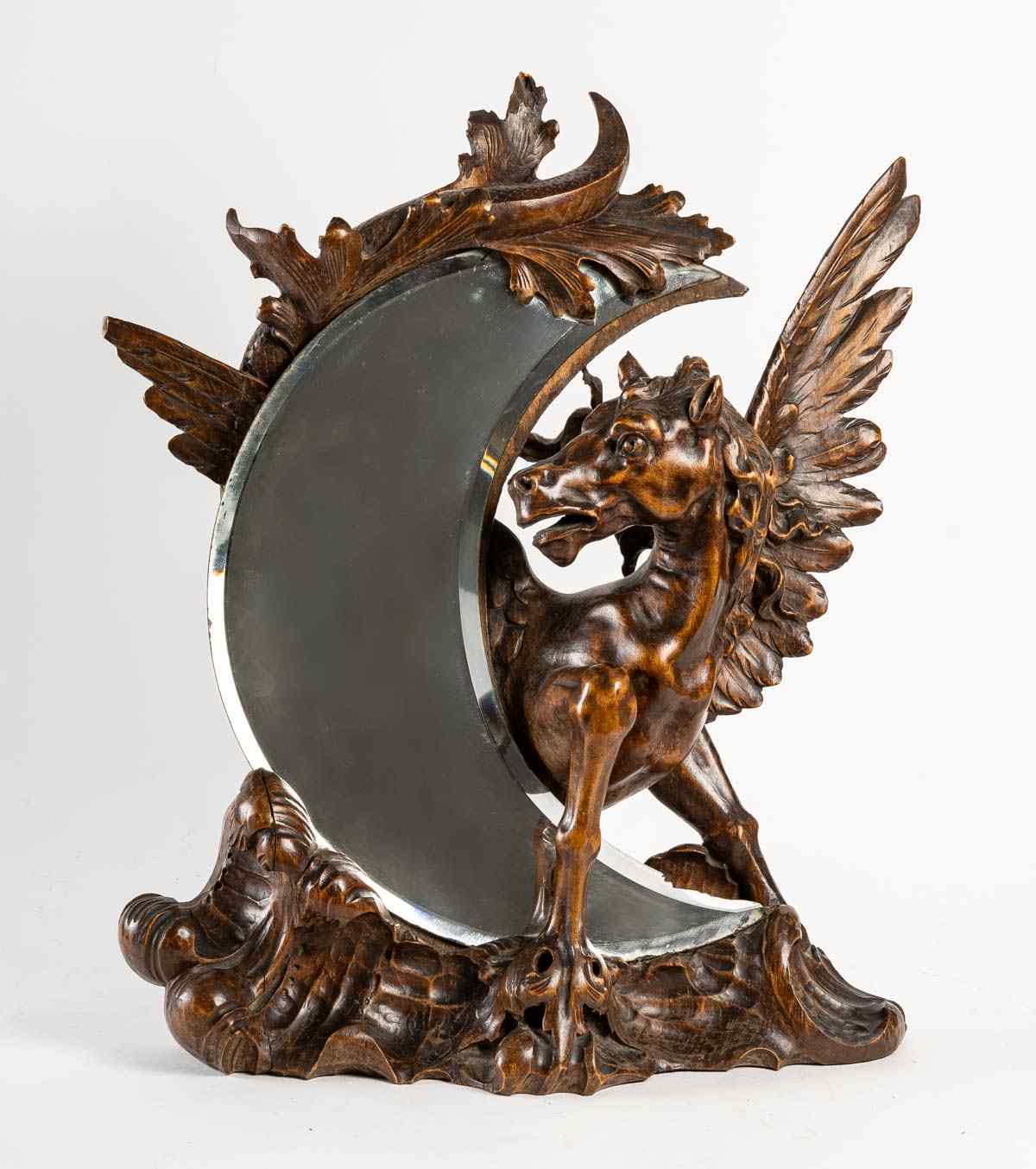 A delightful table mirror in the shape of a bevelled crescent moon, around which a magnificent wooden sculpture, with rounded and muscular forms, is wrapped, representing Pegasus, with his wings spread out, defender and protector of this beautiful moon, his gaze turned towards the person who is looking at himself in the mirror.

Pegasus is most often known as a central character in Greek mythology. According to this idea, he is the son of Poseidon, god of the sea and oceans, and the Gorgon Medusa.  From the moment of his birth, Pegasus was charged by Zeus, the supreme god, with bringing thunder and lightning to Olympus

Beyond this known representation of Pegasus, other hypotheses have emerged as to his origin. The most widespread is the idea that this divine winged horse actually originated from Asian beliefs, more precisely from the Lycian and Assyrian gods.
According to them, Pegasus was the god of storms.
It is therefore from this belief that the Greek myth of Pegasus was born, and in particular its link with Zeus.

This exceptional and very rare piece is attributed to Gabriel Viardot (1830-1906), a famous Parisian cabinetmaker who made carved wooden furniture and was famous for his production of Chinese and Japanese furniture.

In the second half of the 19th century, he developed a taste for phantasmagorical visions populated by animals from ancient and distant worlds such as dragons and salamanders etc...

He is renowned for the quality and refinement of his work.

This mirror is at the same time marked by Japanese and Asian art, which was very fashionable at the end of the 19th century, thanks in particular to the Universal Exhibitions which, from the one in 1867, renewed the repertoires of motifs as well as the artists' techniques.

Encouraged by the prevailing eclecticism, artists, of whom Gabriel Viardot is a perfect example, did not hesitate to mix their sources of inspiration in response to a quest for ever greater wealth and diversity.
macos/deepLFree.translatedWithDeepL.text