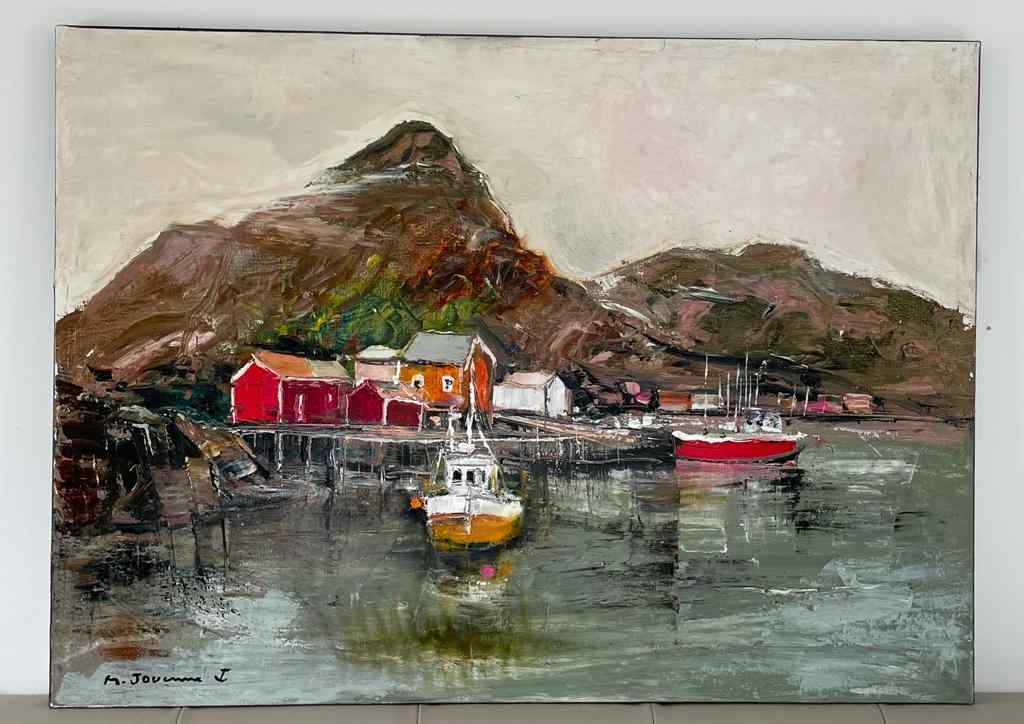 Beautiful oil on canvas entitled: "Cabins at the foot of the mountain" (Norway).
Signed by Michel Jouenne

Prolific artist, painter, but also lithographer, illustrator, and sculptor, born on January 25, 1933 in Boulogne -sur Seine, Michel Jouenne is part of this nursery of talents resulting from the "Young Painting of the Fifties".

His works illustrate life and the natural beauty of our planet through colourful landscapes. Each of his paintings reveals the joy of his creation.
He amazes with his opaque and translucent materials, his large watercolour planes, and his luminous shimmering.

His talent has been rewarded in high places. In 1987, he was made Chevalier du Mérite Culturel et Artistique, then Chevalier de la Légion d'honneur in 1990. The following year, in 1991, he was appointed Official Painter of the Navy.

Michel Jouenne has also created several paintings representing views of the capital: the Eiffel Tower, the Sacré Coeur, the cranes in Paris, or the Grand Palais.

Since 2009, his works have been on permanent display at the 4 sites of the Estades Gallery, in Paris, Lyon, Toulon, and Baden-Baden (Germany).

Hervé Bazin, for whom he created some illustrations in his book "Qui j'ose aimer" (published in 1986 by Grasset) said of him: "Jouenne is a bard of nature... Figurative, he is never a slave to the subject he uses...".

Since then he has never disappointed. He has placed himself on the soil of figurative art. All his exhibitions bear witness to a creation that never gets old.

In each canvas, it is the joy of his creation of landscapes or seascapes: silent landscapes opposed to the roar of the waves. (Guy Vignoht " Univers des Arts ").