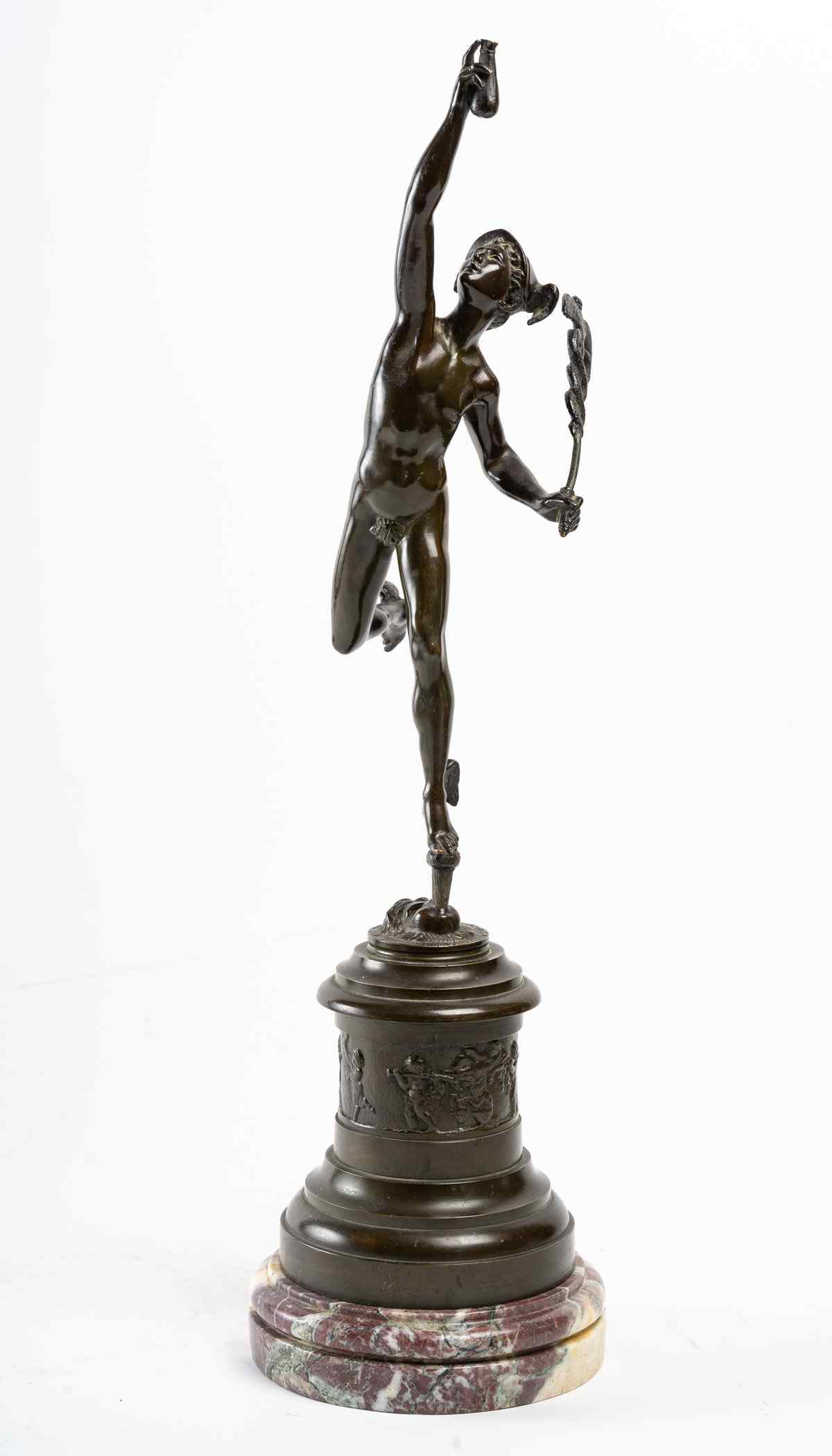 Object description :
"Black Patina Bronze - Flying Mercury - Jean De Bologna - XIXth Cast Iron - Circa: 1900"
After Jean de BOLOGNE known as GIAMBOLOGNA (1529-1608), The messenger of the gods, winged ankles, wearing the petascus, holding the caduceus symbolising commerce and eloquence and pointing the purse towards the heavens, here is Mercury, flying, carried by the breath of Zephyr on which he is balanced.

This magnificent piece is in bronze with a black patina, it rests on a cylindrical base decorated with a bas-relief frieze representing an allegory of the arts after Clodion, magnified by a very beautiful Carrara marble "peach blossom" base, with a creamy white background, made up of irregular fragments ranging from peach yellow to violet.

This airy bronze, inspired by the ancient stories of the Odyssey and the Aeneid, is a reduction of the life-size model executed by Giambologna in 1580, intended to top the fountain in the gardens of the Villa Medici in Rome and kept in the "Museo Nazionale del Bargello", in Florence.

Leone Leoni had made a medal for Maximilian II, showing Mercury flying on the reverse.
The name "Flying Mercury" is attributed to Antonio Vasari.

Giambologna made four versions of the Flying Mercury, of which this one may be after the copy made for the Emperor Maximilian or the Medici.

Giambologna or Jean de Boulogne was born in Douai in 1529. He was a pupil of Jacques Dubroeucq and then went to Italy and visited Florence in 1552 where he obtained the protection of the Medici.

Influenced by Michelangelo and the artists of antiquity, he settled in Florence where he was to exert considerable influence in Europe.

He is known and recognized for the realization of the famous groups of Samson, the triumph of Pisa, the rap of the Sabines, Hercules and the centaur, Bacchus, Mercury, Neptune and the fabulous equestrian statue of Cosimo I de Medici.