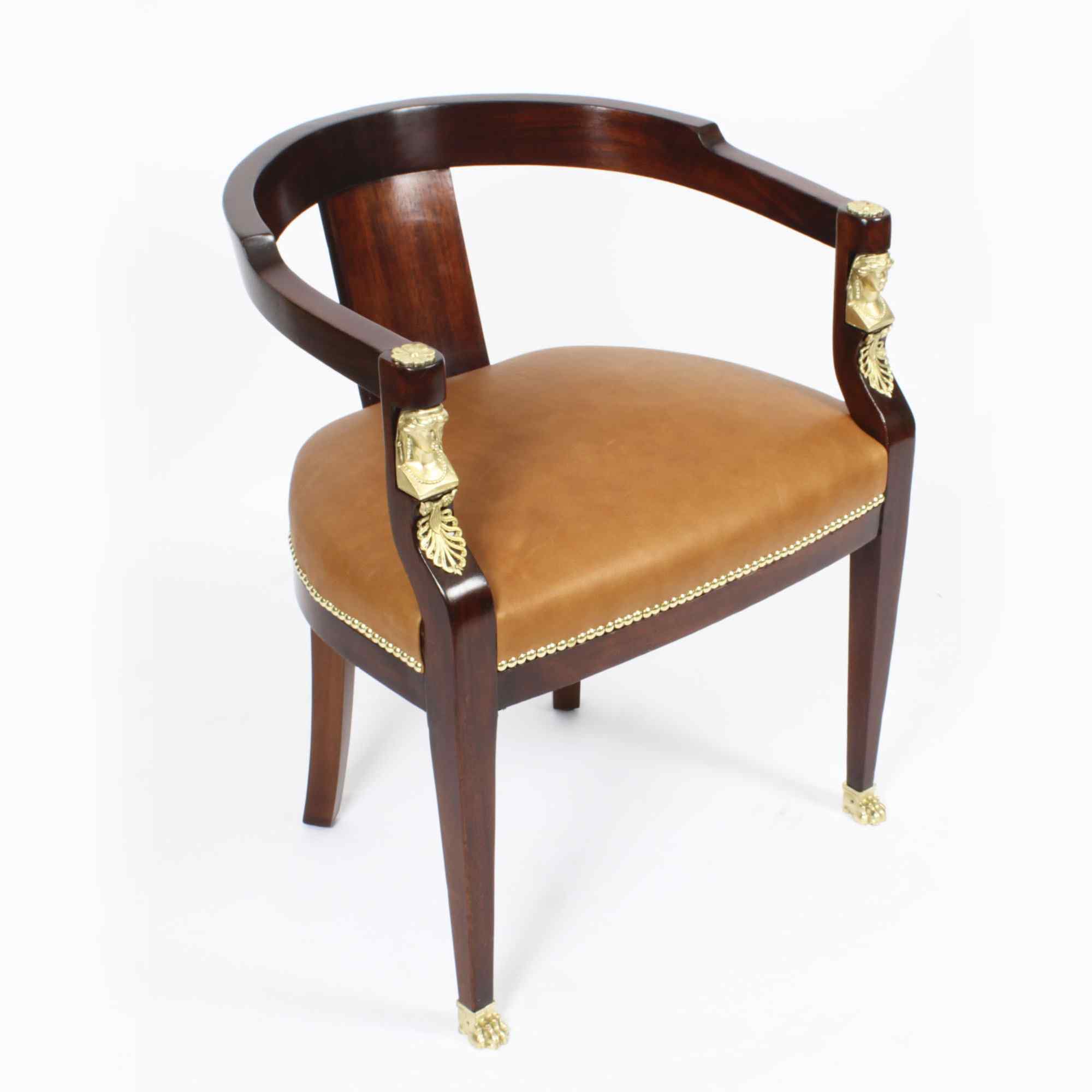 This is a beautiful antique French mahogany Empire "fauteuil du bureau", desk chair, Circa 1850 in date.

It has a curved back and an upholstered leather seat. The mahogany is beautiful in colour and has been embellished with striking ormolu anthemion plaques. It stands on panelled tapering legs heading by ormolu rosettes and terminating in decorative ormolu paw feet.

This chair would be ideal for use with a bureau plat or in the bedroom.

Mahogany
is probably one of the largest ‘families’ of hardwood, having many different varieties within its own species.

Mahogany has been used for centuries in ship building, house building, furniture making etc and is the core structure of just about every 19th century vanity box, dressing case or jewellery box. It became more of a Victorian trend to dress Mahogany with these decorative veneers, such as Rosewood, Kingwood, Burr Walnut and Coromandel, so that the actual Mahogany was almost hidden from view.

Mahogany itself is a rich reddish brown wood that can range from being plain in appearance to something that is so vibrant, figured and almost three dimensional in effect.

Although Mahogany was most often used in its solid form, it also provided some beautifully figured varieties of veneer like ‘Flame’ Mahogany and ‘Fiddleback’ Mahogany (named after its preferred use in the manufacture of fine musical instruments).

Cuban Mahogany was so sought after, that by the late 1850?s, this particular variety became all but extinct.

Empire style,
is an early-19th-century design movement in architecture, furniture, other decorative arts, and the visual arts followed in Europe and America until around 1830.

The style originated in and takes its name from the rule of Napoleon I in the First French Empire, where it was intended to idealize Napoleon's leadership and the French state. The style corresponds to the Biedermeier style in the German-speaking lands, Federal style in the United States and to the Regency style in Britain. The previous style was called Louis XVI style, in France.

The Empire style was based on aspects of the Roman Empire. It is the second phase of neoclassicism which is also called "Directoire", after a goverment system.
Furniture typically had symbols and ornaments borrowed from the glorious ancient Greek and Roman empires.

The furniture was made from heavy woods such as mahogany and ebony, imported from the colonies, with dark finishes often with decorative bronze mounts. Marble tops were popular as were Egyptian motifs like sphinxes, griffins, urns and eagles and the Napoleonic symbols, the eagle, the bee, the initials "I" and a large "N."
Gilded bronze (ormolu) details displayed a high level of craftsmanship.

Ormolu
(from French 'or moulu', signifying ground or pounded gold) is an 18th-century English term for applying finely ground, high-carat gold in a mercury amalgam to an object of bronze.The mercury is driven off in a kiln leaving behind a gold-coloured veneer known as 'gilt bronze'.