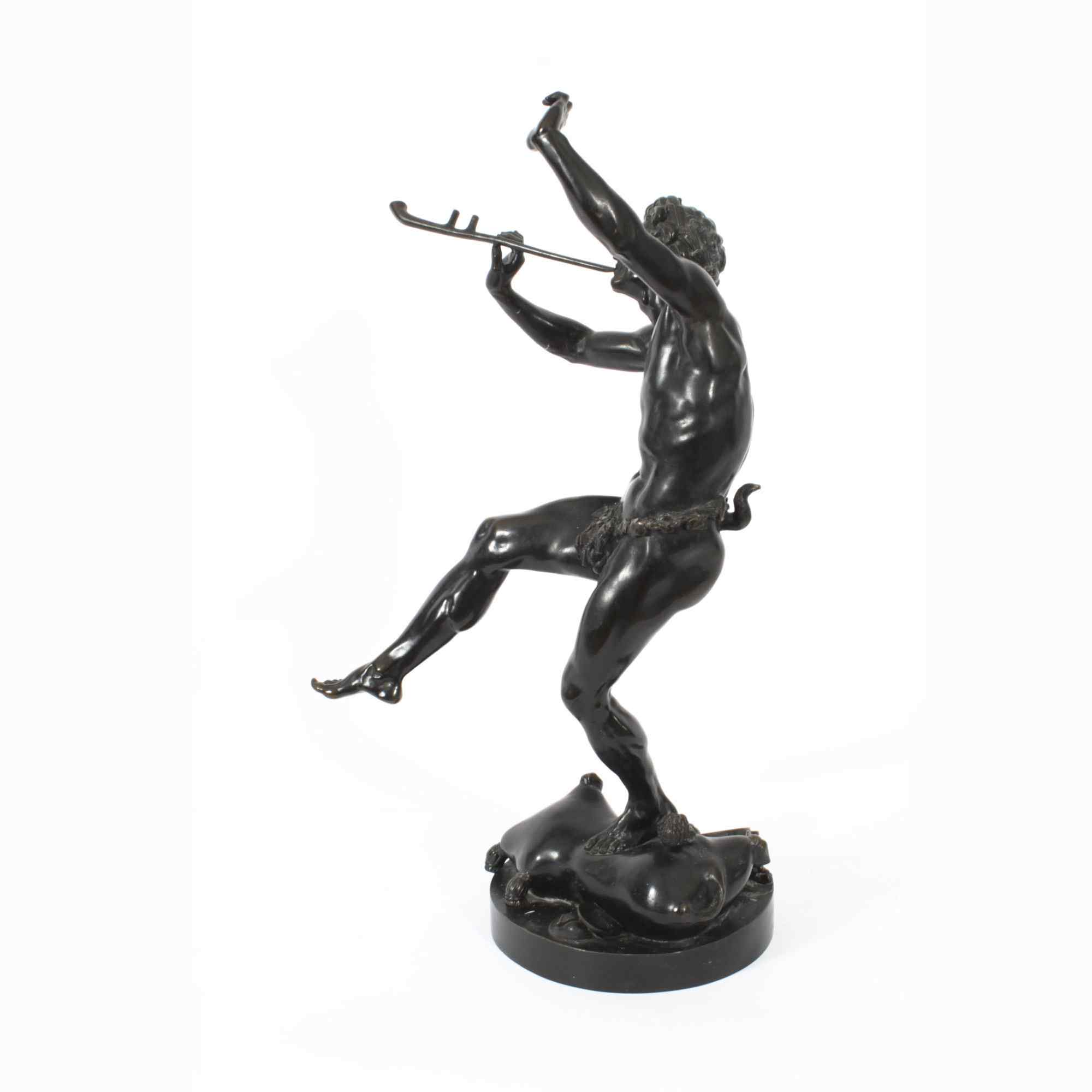 This is a large French bronze sculpture of of Pan the Greek/Roman fertility God of the forest, circa 1860 in date.

The sculpture features Pan playing a flute. Exquisitely incised showing Pan's flowing hair, an exposed torso with raised leg, and a tail, dancing. The statue rests on a circular base.

The attention to detail is absolutely fantastic and the sculpture is extremely life-like.

Pan
The culture of Ancient Greece involved a complex spiritual world of major and minor gods that oversaw human events and engaged in dramas of their own. One of these, called Pan, ruled over nature and pasturelands. He is frequently depicted in literature and artworks. Although he is not one of the major gods of Ancient Greece, he is one of most often referenced figures in Greek mythology.

Pan the God of the Wild
Pan is considered to be one of the oldest of GREEK GODS. He is associated with nature, wooded areas and pasturelands, from which his name is derived. The worship of Pan began in rustic areas far from the populated city centers. Therefore, he did not have large temples built to worship him. Rather, worship of Pan centered in nature, often in caves or grottos. He ruled over shepherds, hunters and rustic music. He was the patron god of Arcadia. Pan was often in the company of the wood nymphs and other deities of the forest.

Pan’s Appearance
Perhaps because of his association with nature and animals, Pan did not have the appearance of a normal man. The bottom half of his body was like a goat, with the top half of his body being like other men. However, he is often depicted with horns on his head, and his face is usually unattractive.

Pan’s Lineage
The parentage of Pan is uncertain. Some accounts say he is the son of HERMES and Dryope. Others say he is the son of ZEUS or the son of Penelope, wife of Odysseus. The story of his birth says that his mother was so distressed by his unusual appearance that she ran away, but he was taken to Mount Olympus where he became the favourite of the gods.

Pan’s Powers
Like the other GODS OF OLYMPUS, Pan possessed enormous strength. He could also run for long periods of time and was impervious to injury. It was believed he could transform objects into different forms and was able to teleport himself from Earth to Mount Olympus and back. He is depicted as very shrewd with a wonderful sense of humour.

In Ancient Roman mythology, a SIMILAR GOD is called Faunus.

Pan and Music
The MYTHOLOGICAL STORIES involving Pan usually involve his romantic interest in a lovely goddess of the woods who spurns his advances and gets turned into an inanimate object to escape him or who otherwise flees from his ugly appearance. One story concerns Syrinx, a beautiful wood nymph. She flees from Pan’s attentions, and her follow goddesses turn her into a river reed in order to hide her from him. As the winds blow through the reeds, they make a gentle musical sound. Because he does not know which reed Syrinx is, he cuts several from reeds from the group and set them in a line to make the musical instrument, the pan flute. Pan’s image is often depicted with this instrument.

Pan Gave Humans the Word “Panic”
One story involving Pan is the tale of war, in which Pan helps his friend survive a vicious struggle by letting out an immense cry that frightened the enemy and caused him to run away. From this story, we get the word “panic,” the sudden, uncontrollable fear that leads people into irrational behavior.

Pan in the Modern World
Over the ages, Pan has been a symbol of the force of nature. In the 1800s, interest in this mythological figure revived, and communities organized festivals in which Pan was the central figure. Mythical stories of his antics abound, and he continues to be a figure representing the ancient mystery of the forest, hunting activities and wildlife.

Like the OTHER GODS of Ancient Greece, Pan embodies many of the qualities of the world over which he ruled. He is depicted as energetic, sometimes frightening, with the wild, unbridled creative force of nature that makes him an interesting, and often entertaining, character.