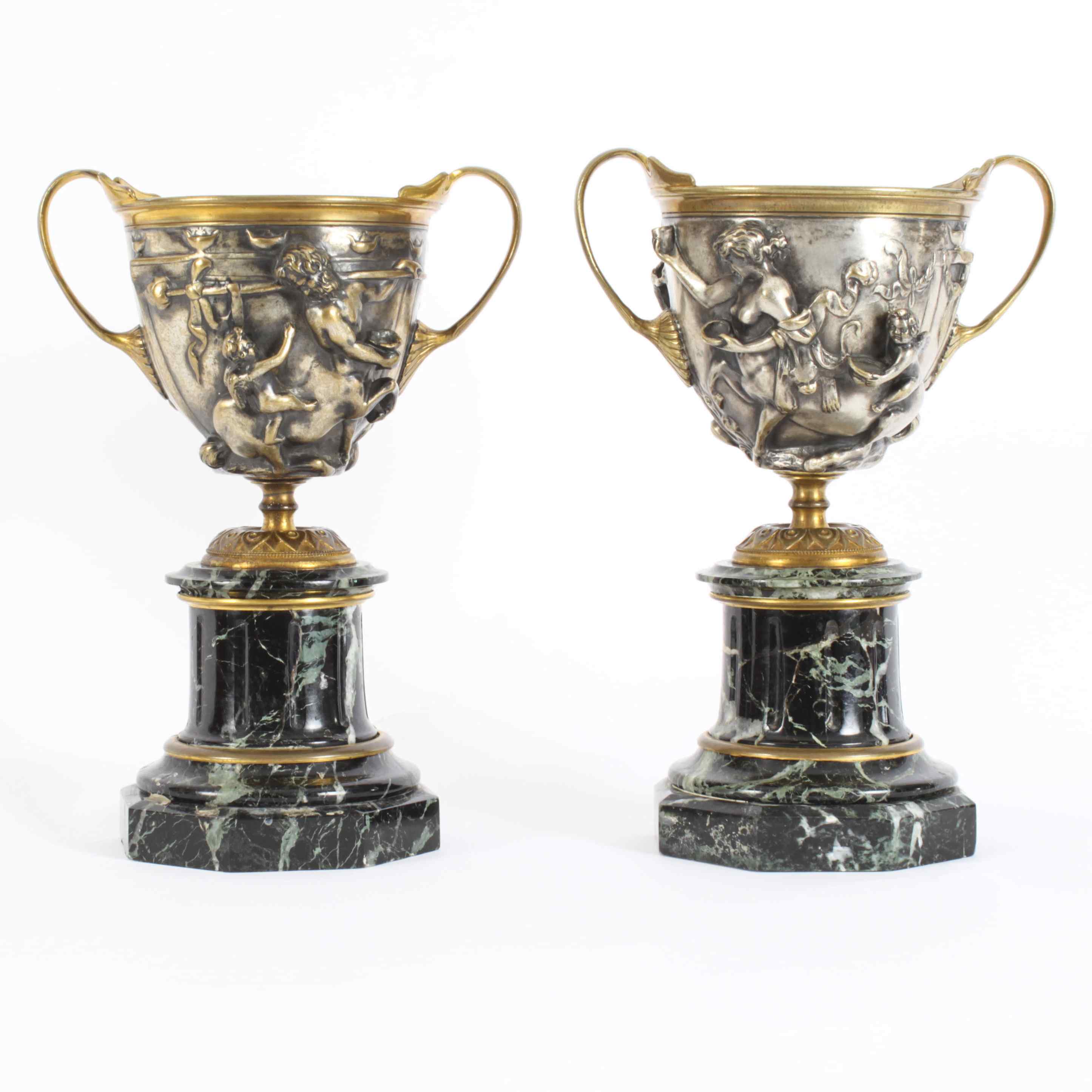 This is a remarkable pair of antique French silvered bronze and marble pedestal Grand Tour Urns, circa 1860 in date.

These stunning urns have been superbly cast in high relief with bacchanalian centaurs and they are mounted on decorative Verde Antico marble stop fluted pedestals.

The attention to detail throughout this pair is second to none and they are sure to enhance great historical fascination wherever they are placed.

Condition:
In excellent condition with only minor signs of use commensurate with age and wear.

The Grand Tour was the traditional trip of Europe undertaken by mainly upper-class European young men of means. The custom flourished from about 1660 until the advent of large-scale rail transit in the 1840s, and was associated with a standard itinerary.

It served as an educational rite of passage. Though primarily associated with the British nobility and wealthy landed gentry, similar trips were made by wealthy young men of Protestant Northern European nations on the Continent, and from the second half of the 18th century some South American, U.S., and other overseas youth joined in. The tradition was extended to include more of the middle class after rail and steamship travel made the journey less of a burden.

The primary value of the Grand Tour, it was believed, lay in the exposure both to the cultural legacy of classical antiquity and the Renaissance, and to the aristocratic and fashionably polite society of the European continent. In addition, it provided the only opportunity to view specific works of art, and possibly the only chance to hear certain music. A grand tour could last from several months to several years. It was commonly undertaken in the company of a knowledgeable guide or tutor.

The Grand Tour not only provided a liberal education but allowed those who could afford it the opportunity to buy things otherwise unavailable at home, and it thus increased participants' prestige and standing. Grand Tourists would return with crates of art, books, pictures, sculpture, and items of culture, which would be displayed in libraries, cabinets, gardens, and drawing rooms, as well as the galleries built purposely for their display; The Grand Tour became a symbol of wealth and freedom.