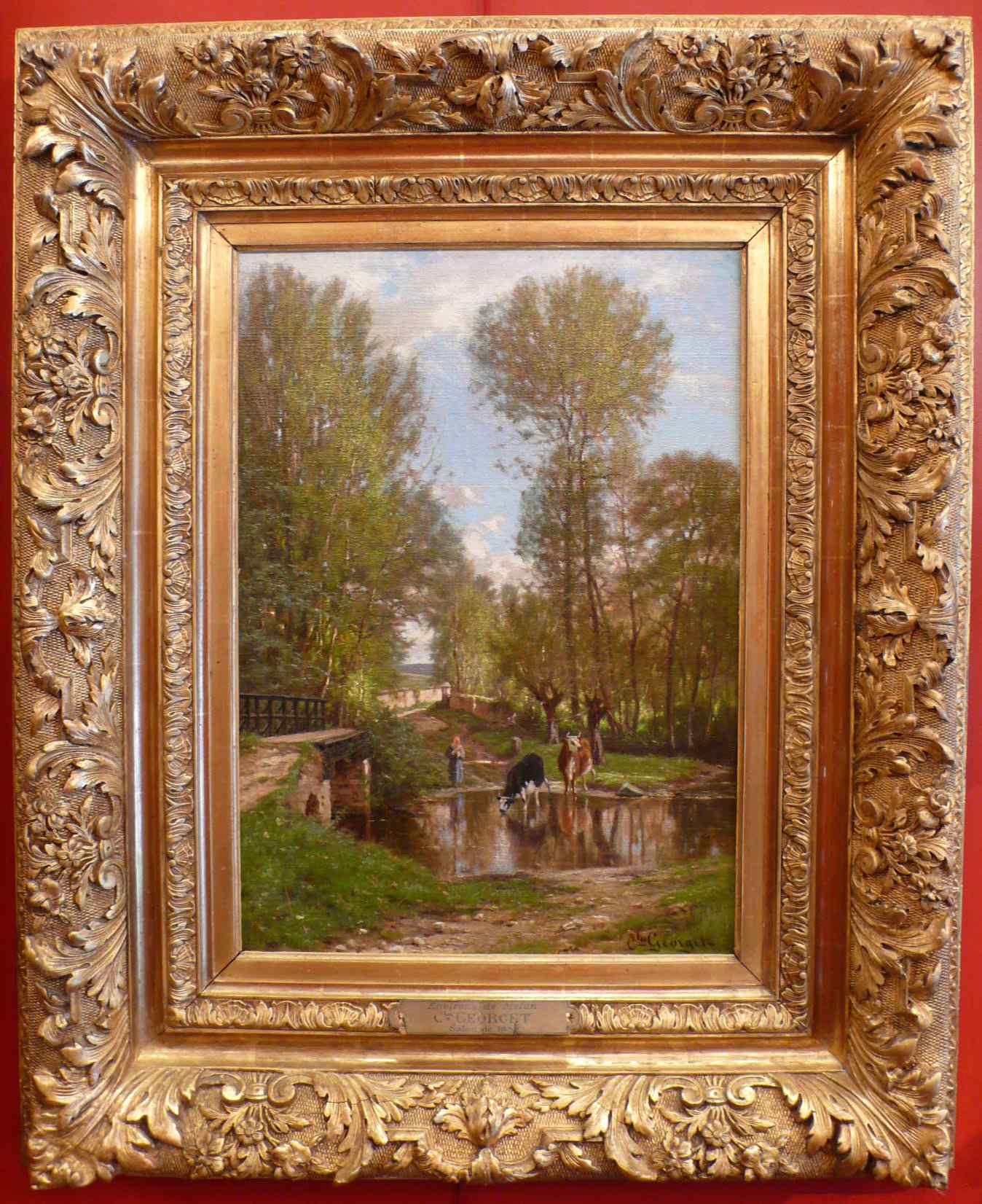 GEORGET Jean-Charles ( 1833 / 1895 )
The neighborhood of Melun.
Oil on canvas signed lower right.
18,2 x 13 in.
Certificate of authenticity.
Painting exposed during the exibition of 1881 under the number 977.
Jean Charles Georget was born in Paris on 1833.
He was taken into the care of Monsieur Martial, a guardian and friend of his father, where Charles endured a childhood which was loveless, cold and without affection.
Save for his passion for Art and nature, he became disinterested in his studies and he felt isolated in his boarding school in Gillon de Belville where he would often draw flattering portraits of his tutors. They in turn lifted punishments against him for his frequent absenteeism and daydreaming, in return for the notoriety they gained as the sitter.
He often traveled to Champagne seeking his fathers origins, where he loved to sketch and paint in the fields and lanes surrounded by vines.
At eighteen, he entered the house of Monsieur Caron, the notable Paris engraver as his apprentice, escaping the unforgiving regime of his youth and soon became appreciated for his vast talent and encouraged enormously by Henriquet Dupont, a member of the powerful 'Institute.'
By the age of twenty eight, Georget had mixed with the artistic elite of Paris, yet felt out of place in their company and the café socialle. He preferred instead the peace and tranquility of Farcy Les Lys, a sister village of Barbizon, to the south of Paris and bordering Fontainebleau, where he favoured the light and the beauty of the forest and held a never ending fascination of the river Seine.
Georget was a great observer of the qualities of light and marveled at the intricacies of nature and the deer he stalked. As a painter, he wanted nothing more than to be himself. Neither money, fame nor success mattered to this simple unassuming man.
Charles was a quiet man, a seeker and a silent man, who would often trek for hours into the forest in search of a hidden pool, the deer and the quietness of a moment, as captured here in this beautiful oil painting sharing with us the dawn light beneath the arboreal canopy.
He traveled to the Pyrenees with Gelibert, dreamed of the brilliance of light he witnessed in Algeria and was encouraged by Daubigny and Constant.
Teaching, painting and his fascination for nature were his all prevailing passions.
He married Elisa Antoinette Sautereau , his student and a former pupil of Eugene Claude, in 1863, filling his life with joy.
Though remaining childless, they adopted Juliet, their niece, following the death of her parents and whose career as a painter won many honours.
Changing to much larger compositions in 1873 on the advise of his peers, Jean Charles began a new and critical phase in his career, introducing animals and figures into his works and exhibiting at the Paris Salon from 1875 onwards.
This is the first of these large formatted pieces by Georget and the first to be exhibited at the salon. In total, he exhibited a remarkable number of 36 works.
He passed away in the winter of 1894 from a 'chill' contracted on one of his early morning sojourns into the forest he loved and now rests in the municipal cemetery of Dammarie Les Lys